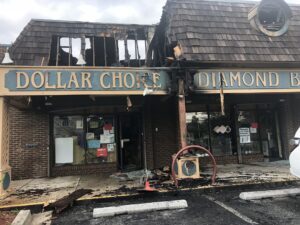 Gaithersburg Police (GPD) and the Montgomery County Fire and Rescue Service (MCFRS) are investigating five fires and one commercial burglary that occurred around 1 a.m. and 2 a.m. Thursday morning, GPD said in a report. communicated.

The “suspicious situations” occurred in the Gaithersburg and Montgomery Village areas, police said. GPD asks anyone with information to call the Investigations Section at 301-258-6400 or the MCFRS Fire and Explosives Investigators at 240-777-2263.

At 1:30 a.m., GPD responded to an alarm at the Jewelry Exchange of Maryland on North Frederick Avenue. Police said the suspects entered and took jewelry. At the same time, the MCFRS responded to Divot Place for a fire reported in a shed / fence at the back of a house. Damage to the structure is estimated at around $ 30,000, MCFRS chief spokesperson Pete Piringer wrote on Twitter.

About five minutes later at 1:35 am, firefighters responded to Dellcastle Road with a reported garage fire, police said. Piringer said two people in the house were unaware of the blaze and were safely evacuated. The damage is estimated at approximately $ 150,000.

At 1:42 a.m., MCFRS proceeded to Watkins Station Circle with a reported car fire. Police said the car was reported stolen and the incident was under investigation for arson.

Finally, at 2:01 a.m., firefighters responded to a fire reported at the Galanis Mall on East Diamond Avenue, which law enforcement is investigating as arson. Damage to the structure is estimated at over $ 100,000, Piringer said, and damage to the contents is estimated at $ 80,000.

REMARK: @MontgomeryCoMD Anyone with information regarding multiple fires (fence, garage, vehicle, commercial building) that occurred at the start of 7/10 (between 1 and 2a) in the same general area of ​​Gaithersburg / Montgomery Village @mcfrs Fire / arson hotline at 240.777.2263 or your local PD https://t.co/jEX56rluUv pic.twitter.com/InCyXE5xUq

Maryam is a reporter for Montgomery Community Media. She graduated from the University of Maryland in 2019 with a bachelor’s degree in audiovisual journalism. Previously, she was an intern at MCM. She can be contacted at [email protected] or on Twitter @maryam_mcm.